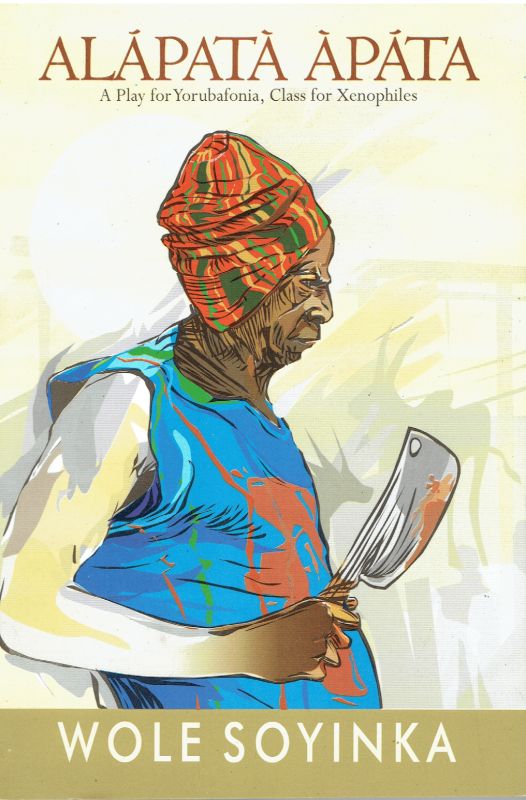 In this second part of Alapata Apata’s review, we shall consider the play text as a satire through the style and techniques deployed in Alapata Apata.

The previous post was an overview of Alapata Apata and the major themes in the play text. I was able to dissect the text as a dramatisation of the Nigerian saga through the characters and their assigned roles.

Is Alapata Apata a Satire?

Of course, Wole Soyinka’s Alapata Apata can be described as a satire because everything about the text, from its title to the subject matter, themes and literary elements inherent in the text point out to this fact. Wole Soyinka do not just take inferences from real social, economic and cultural realities of his society, he is able to bring both human and institutional vices and follies to censure through the elements of Satire deployed in Alapata Apata.

Again, as a satirical tool for social reform, Wole Soyinka is able to take the reader through a didactic process of how to bring about change in their society outside the theatre walls. Using “Lehrstuck” technique, Soyinka appeals to his audience about the need for revolutionary actions; which is the chief aim of satire.

Style and Techniques in Alapata and Apata

Obviously, Wole Soyinka is able to convey his message through archetypal characters. These characters dramatise the various socio-political concerns in Alapata Apata. For example, the three strands of political institutions—military, civil and traditional—are represented by General, Daanielebo, Asipa, Otun, and other ruling elites respectively.

Noting that Alapata Apata is written within the Nigerian context, the excesses and idiosyncracies of these ruling elites are condemned through the eyes of Teacher, Alaba and other characters who represent significant positions in the socio-political context of Nigeria.

Actually, there is a lot to discuss in this segment because the diction used in Alapata Apata plays a significant role in foregrounding the text as a satire. In the main, the playwright is able to spice up the actions of the character with appropriateness of language is excellent. Though, Wole Soyinka can only explain the trick behind this, we can say for sure that the reader is able to gauge the linguistic competence of each character as regards the societal strata they represent.

For instance, we saw the pidgin of Mechanic, the standard English of Teacher, the military jargon of General and his troop and the code mixing between Alaba and his son. See:

From the foregoing, it is safe to say therefore, that as a satire, the play represents virtually all the class of people in the society. Besides, we can summarise that though it is unlike Soyinka, the diction of Alapata Apata is simple and easy to understand.

When we discuss Alapata Apata from the satirical standpoint, it is a sin to omit the efficient use of humour and exaggeration by Soyinka in his effort to bring the object of ridicule to correction. The central figure, Alaba, for one is very funny and evokes laughter in the reader each time he has an encounter with the objects of ridicule—Daanielebo, Prospector, Student etc. In various scenes in the play, Soyinka lampoons the cluelessness of the Nigerian elites through comic effects.

This discussion of pun as seen in the text is an addendum to the use of humour explained above. But two things can be deduced here.

First, when Alaba plays on the words: “accent”, “askew”, “axis” and “accident” (in page 70), the reader laughs hard. The wrong application of tone marks on Alapata by the student and General who reads Alaba’s signpost upside down and redirects his troop to the wrong location is also laughable.

Second, beyond the laughter, Soyinka is actually mocking the cluelessness and stupidity of the characters in question. Again, reeling from the title of the text, Alapata Apata is a classroom for Xenophiles, and the language enthusiasts who are using the language wrongly.

Alapata Apata is replete with metaphors. This is in line with Soyinka’s attempt to satirise  the greed and corruption in high places. The playwright codified certain meanings in words, names, actions and expressions of the characters. For example, General’s troop codenamed “operation longa  throat” signifies the repulsive greedy desires of the ruling elite.

The “rock” on which Alaba sits idly is symbolic. It represents the untapped resources in Nigeria as a result of the cluelessness and ineptitude of the ruling elites. The rock could also mean the strength and courage needed for revolution while Alaba himself is a symbol of social reformation and revolution. His attempt to straighten the “crooked world” is significant.

The “crooked world” or “globe” is also symbolic. It represents the pathetic state of the writer’s society due to the ineptitude of clueless and self-seeking opportunistic leaders. The “asikiwu” globe could also represent the universality of the developed issues in the text. That is, the generality of human follies and idiosyncrasies.

The text is also laced with several allusions to real events in the socio-political society of Nigeria which the dramatist lives. These serve as backdrops to the developed issues in Alapata Apata. For instance, Soyinka lampoons the high-handed General and his slavish troop using to Fela’s song—Zombie; which perfectly describes the military as one who do not have a mind of their own.

The playwright also shows his artistic qualities by deploying African proverbs, myths, songs and axioms in the play text. He blends these elements with the western form as dramaturgical weapon in a bid to sell African culture and tradition to the world. Alaba, the central character usually uses axioms and proverbs whenever he is in deep thought. With this, Soyinka also succeeds in his plan to correct the misuse of language among Africans.

In the final analysis, in assessing the style and techniques in Alapata Apata, we see that the character and their roles sit perfectly in the context which Soyinka places them. Allusions to social events, polices and historical figures through the satirical elements of metaphor, symbol and imitation contribute to the general development of the play text.

Language and Style in “Unexpected Joy at Dawn” by Agyei–Agyiri

Styles and Techniques in The Lion and the Jewel