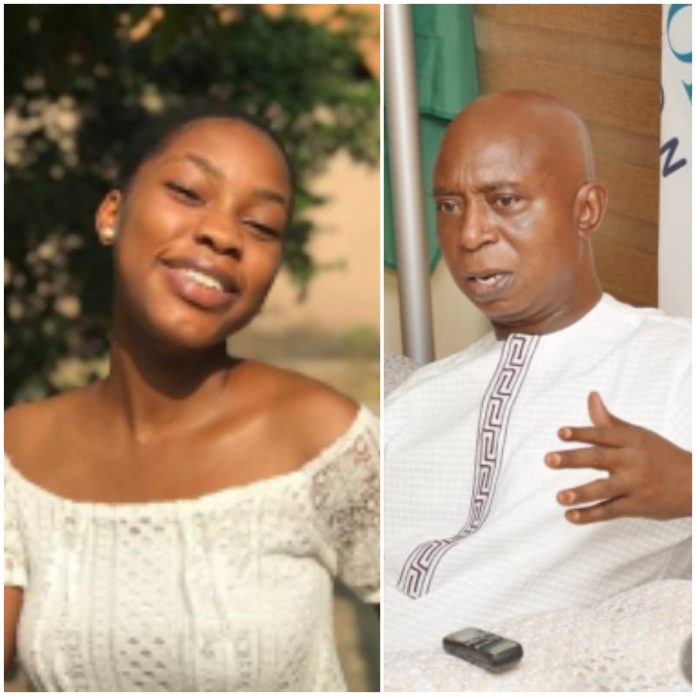 Another Nigerian lady who identifies as Prisca Aniemeke has taken to her social media page to demand Justice for her father, Mr Godwin Aniemeke who was arrested by Nigerian police on the order of Billionaire Ned Nwoko.

A former beauty queen, Pamela Ifejoku, had in a viral video on her Twitter page accused Nwoko of putting her father in jail and causing her mother to spend her birthday in prison because their community resisted his attempt at land-grabbing.

Here is her story:

“Ned Nwoko got my father, Mr Godwin Aniemeke, arrested on the 24th of September, 2020 at about 3 am by police men from Force Criminal Investigation Department, Zone 10, Abuja at our village house in Idumuje-Ugboko, Delta State. These police men, about twenty of them, came in a couple of Siennas. He was taken to the SARS office opposite Asaba Airport where his statement was taken, after that, he was taken to Zone 5 Police Station, Benin where he stayed for a few hours, and finally, he was taken to FCID, Abuja.

That day, the 25th of September, was my mum’s birthday and we woke up (the rest of the family was in Lagos) early that morning to the news that my dad had been arrested. My first question is, why would they arrest an innocent man like a criminal? Why would they come at midnight, jump over the fence intimidate the gate man and even break through the window just to arrest one man? I try not to think about that night too much. When he was at home alone (apart from the gate man who was at the gate) only to start hearing shouts from men in his compound.

I try not to imagine how he must have felt when they were removing the burglary of the window. I try not to imagine how he must have felt walking out of the house to see policemen surrounding his compound, like he was a criminal. He was first detained at FCID Abuja and then remanded at Nigerian Correctional Centre, Suleja. He remained in the prison on the allegation that he was involved in the act of terrorism, burning of houses, destruction of properties of some indigenes of the village and the murder of one Cyprian Kumaorun who is unknown to him and the other men who have been arrested. These allegations were made by Ned Nwoko.
Those three months were the toughest we had ever faced in our family. I remember writing in my diary that the day of his arrest was “the gloomiest day ever”. We were at home while the head of the family, the breadwinner, was locked in prison, all the way in Abuja. We could only communicate with him when his phone was given to him. Imagine being on a phone call with your dad and hearing someone shouting that he had just a minute more or that his time was up.

Imagine your father having to spend his birthday in a prison cell for committing no crime whatsoever.
Finally, he was granted bail on the 30th of October at the Federal High Court, Abuja, by Hon. Justice O. E Abang. He wasn’t able to perfect his bail until a few weeks later and on the 19th of November, 2020, a few days after his birthday, he came home. I don’t even want to talk about how he looked when he got back or how my dad was a shadow of himself.
When he came back home, many family members and friends advised him to stay away from the village and their matters. If he had made that decision, how long can he possibly stay away from the place of his birth? Is that what Ned Nwoko wants? He wants the men of the town to run away?
Moving on, please stay with me🥺. After their (my dad and the other men involved in the case) bail, they were mandated to come for trial. My dad had to travel from Lagos to Abuja to attend this trial and every time he got there, it was adjourned to another date. This happened about four times. It was on his way back from this trial that he was arrested the second time.

On March 25, 2021, they came to the Federal High Court, Abuja, to attend their trial in Charge Number; FHC/CR/11/19. Immediately they exited the building, they were arrested by officers from the FCID Abuja. They were subsequently detained at FCID Abuja for one week, before they were taken to Delta State Police Command, Asaba, where they are being detained till now. The police claim that they were arrested for the alleged murder of a certain Cyprian Kumaorun. However, they are already standing trial for this same alleged offence at the Federal High Court, Abuja. Now, they are still in the police station at Asaba. Is this really happening again? Are we going to go through all the processes we went through last year again? While we are still recovering from last year’s arrest, we have to deal with another one.

I’m a student and my exams are forthcoming. How am I supposed to read when every second I’m bothered about my dad and wondering how he’s doing? Is this how things are supposed to be? Ned Nwoko what are you gaining from all these?

Please, just release our fathers and stop oppressing your people. Release my dad, release @pa_melanin dad, release everyone that you have put in the prison cell. Live peacefully with your brothers. I don’t think it’ll cost you anything to do this.”