Detailed Analysis of “The Lion and the Jewel” by Wole Soyinka 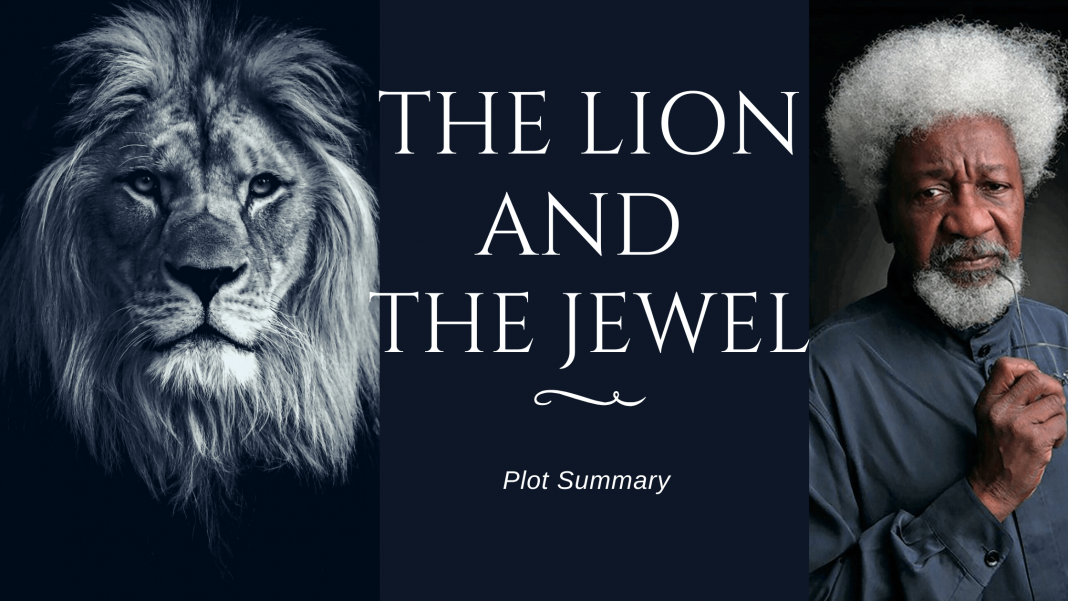 Inside, you will find the detailed analysis of The Lion and the Jewel by Wole Soyinka. The Summary of events, themes and characters in the play are complied in this post.

The Lion and the Jewel is a play text by Wole Soyinka. It was first published in 1962 though it had been performed in Ibadan in 1959. It was later staged at the Royal Court Theatre in London in 1966.

Basically, The Lion and the Jewel dramatises the conflict between Modernism and Traditionalism through its main characters – Lakunle, Sidi and Baroka.

However, to have more understanding of the text, we shall discuss the plot summary, style and techniques and the themes in The Lion and the Jewel in subsequent paragraphs.

Let’s get into it.

First, the plot summary of the Lion and the Jewel.

Plot Summary of The Lion and the Jewel

The Lion and the Jewel has three sections. Each part is very important in our analysis because they dramatise the major events in the play.

Also, they represent the time setting in which the events in the play take place.

The sections of the play are represented as Morning, Noon and Night. Therefore, the The Lion and the Jewel’s summary is based on these three cardinal aspects.

This forms the first part of The Lion and the Jewel’s summary. It introduces us to the main characters, Lakunle and Sidi.

Lakunle the village teacher is interested in Sidi, “the village belle” from the beginning of the play.

This is so because he abandons his pupils and walks out the morning class to meet Sidi as she passes by the school.

Sidi is seen carrying a pail of water which Lakunle insists on carrying for her. She refuses his gesture because it will make her look silly before the villagers.

Offended, Lakunle scolds Sidi for wearing a cloth that leaves her breasts open. Meanwhile, Sidi complains that other options are inconvenient. Hence, she could not have won a better cloth.

The characters continue to argue so much that Sidi says the villagers believe that the school teacher is stupid. In his response, Lakunle says he is not moved.

He however thinks that Sidi’s brains is smaller than his because of her gender. Indirectly, insulting the largesse feminine class that Sidi represents.

As the plot progresses, Lakunle professes his love for Sidi. He loves her dearly and will like to marry her.

In trying to woo her, the school teacher uses sweet words and endearing adjectives to show his admiration of her stunning beauty.

In fact, Lakunle promises the village belle heaven on earth. For instance, he says he will treat Sidi like ‘the Lagos couples I have seen.”

But they all fall on Sidi’s deaf ears. Sidi refuses to reciprocate Teacher’s love because he refuses to honor the age-long tradition of bride price.

Lakunle sees traditional practice of pride price as an uncivilised and outdated custom. Meanwhile, Sidi sees it as an important factor in marriage.

According to her, if Lakunle pays her bride price, it will not only re-affirm her virginity status but also save her from public humiliation.

To further show his resentment against the cultural norm, he compares it to going to the market to buy a sheep or goat for domestic purpose.

In her reply, Sidi describes the modern culture of kissing as strange and disgusting. Hence, the first instance of clash between modernism and Traditionalism in The Lion and the Jewel.

The Dance of the Lost Traveller

This part of The Lion and the Jewel Summary is called the sub-plot. It can also be called ‘a play within a play’.

The Dance of the Lost Traveller introduces the arrival of the Photographer who rides on “the devil’s own horse” (motorbike).

The Photographer also comes with “the one-eyed box” (camera) which he uses to capture beautiful sights in the photo album.

The album has the elegant picture of Sidi spread on the front page and on a two-page sheets inside while Baroka is featured “in a little corner somewhere in the book and that corner he shares with one of the village latrines.”

A young man is picked to act the role of Snake, Lakunle is forced to play the Traveller’s role while four girls forms the wheel of the car the Traveller rides.

Lakunle pretends to drive the “car”. When the car refuses to start, he gets down to check the wheels (girls) and pinches them. He tries to restart the car but it fails.

He then decides to trek instead. Soon he begins to hear a scream. He recognises Sidi immediately and tries to take her pictures. While at it, Baroka ‘the lion’ enters.

Baroka plays chief role. Later, as he stares at Sidi’s pictures it occurs to him that it’s been five full moons since he marries his last wife.

This part of the Lion and the Jewel Summary is the second act of the play text. It introduces us to the game of wit and experience between Baroka, Sidi, Sadiku and Lakunle.

At a roadside near the Market Square, Lakunle is seen carrying the firewood that Sidi asks him to fetch for her.

As Sidi toes after him, Sadiku (Baroka’s eldest wife) approaches them with a shawl over her head and informs Sidi that Baroka wants to marry her.

She tries to convince her that Baroka won’t take any more wives if Sidi marries the Lion. Lakunle soon gets angry but Sidi stops him.

The school teacher warns her about the wits and the cunningness of Baroka. Lakunle narrates how the village head disrupts the activities of the railway construction engineers because of selfish reasons.

After failing to convince Sidi to marry Baroka, Sadiku goes to inform the chief about the failed mission. Then Baroka thinks of a new approach to win the heart of Sidi.

He lies to Sadiku that he lost his manhood a few weeks ago. He pretends to be sober because he is no longer active.

This is third and final part of The Lion and the Jewel’s summary. In this act, we are made to see the conquest of Baroka.

How he eventually uses his wits and tricks to not only fool Sadiku but also to outsmart Sidi.

After Sadiku leaks the secret of Baroka’s impotence to Sidi, she plans to visit the old lion to play with his “thing” and make fun of him.

It turns out that Baroka is playing over their intelligence (Sadiku and Sidi). His pretence to be no longer virile is part of his tricks to accomplish his mission this time around.

Fast forward to the night, Baroka wrestles with a young man in other regain his strength.

Soon Sidi appears in Baroka’s bedroom, believing that he is indeed impotent as Sadiku reveals to her earlier.

At first, Baroka seems to be indifferent to her presence in the room. Meanwhile, he knows that he has outsmarted Sidi and Sadiku deep down.

Outside, Sadiku and Lakunle wait for Sidi to return. Lakunle, especially appears to be very anxious and impatient to see the outcome of Sidi and Baroka’s meeting.

In fact, he is ready to pull a fight with the chief if things go south. As soon as Sidi appears, we know immediately that she is defeated. Baroka tricks her to believe that he is indeed impotent.

The lion has preyed on her and has taken her virginity. Though disappointed, Lakunle re-affirms his decision to marry Sidi but with no bride price is the purpose (virginity) has been defeated.

Another scene opens with Sadiku informing Lakunle about Sidi’s wedding preparation. Lakunle is very happy at the news. A twist came to the event when Sidi declares that she is marrying Baroka instead.

According to her, despite being old, Baroka is full of life while Lakunle on the contrary is “ten year dead.” As the drama comes to the tail end, traditionalism triumphs over modernism.

Baroka defeats Lakunle to win the heart of the jewel of Ilujinle. The drama ends with Sadiku invoking marital blessings on Sidi, Baroka’s new and youngest wife amidst drums, songs and dances.

Major Characters in the Lion and the Jewel

Here is a short note on the major characters in The Lion and the Jewel.

The Lion and the Jewel Characters

Lakunle is a semi-illiterate school teacher in the village of Ilujinle. Though half-baked, he represents modernism in The Lion and the Jewel. He is a major character in the play.

In the play, the school teacher professes his love for Sidi, the village belle. He however resents core traditional customs like bride price which eventually makes him lose Sidi to Baroka.

He is the Protagonist in The Lion and the Jewel. He also plays the role of the Traveller in the sub-plot of the play.

Sidi is another major character in The Lion and the Jewel. She is ”the village belle”, meaning the most beautiful girl in the village of Ilujinle. She is also called the “Jewel of Ilujinle”.

She is a strong traditionalist that respects her culture. Her opposing view on marriage leads to the marital fallout of her relationship with the school teacher.

As the most beautiful girl in the village, Sidi is very egotistical. She does not take Lakunle’s marriage proposal seriously because he refuses to pay her bride price.

Her pride later leads to defeat as Baroka outsmarts her. She walks herself to the Chief’s bedroom where she is raped and lost her virginity.

Another chief character in The Lion and The Jewel is Baroka. He is the traditional head of Ilujinle village. He is also referred to as “the lion” in the play text”

Baroka is portrayed as a conservationist. He is a custodian of African culture. On the bad side, he is an “enemy of progress and development.”

This is evident when he bribes the government officials to stop the construction of railway lines in his village.

Baroka is also presented as a master of wit and strategy in the Lion and the Jewel. He outsmarts Sadiku and Sidi by pretending that he is impotent. By his cunningness, he raps Sidi who eventually becomes his wife.

Baroka is the antagonist in The Lion and the Jewel.

Sadiku is the eldest wife of Baroka. She is also the Queen of Ilujinle. She plays a prominent role in convincing Sidi to marry Baroka though she fails in her attempt.

Sadiku is portrayed as a gossip in the Lion and the Jewel. She has a loose tongue and can not keep a secret. In the play, she reveals the weakness (impotence) of Baroka to Sidi.

At the tail end of the play, she also plays a prominent role. She is seen praying for Sidi during her marriage ceremony. She invokes marital blessings on her.

Aliatu is the youngest and favourite of Baroka’s wife before Sidi takes her place. She seen pulling out hair from Baroka’s armpit.

Soyinka portrays her as a jealous woman in The Lion and the Jewel. When Baroka tells her that he wants to take a new wife, she is not happy.

Reacting, she yanks off Baroka’s hair angrily and leaves his armpit bleeding.

Language and Style in “Unexpected Joy at Dawn” by Agyei–Agyiri

Styles and Techniques in The Lion and the Jewel