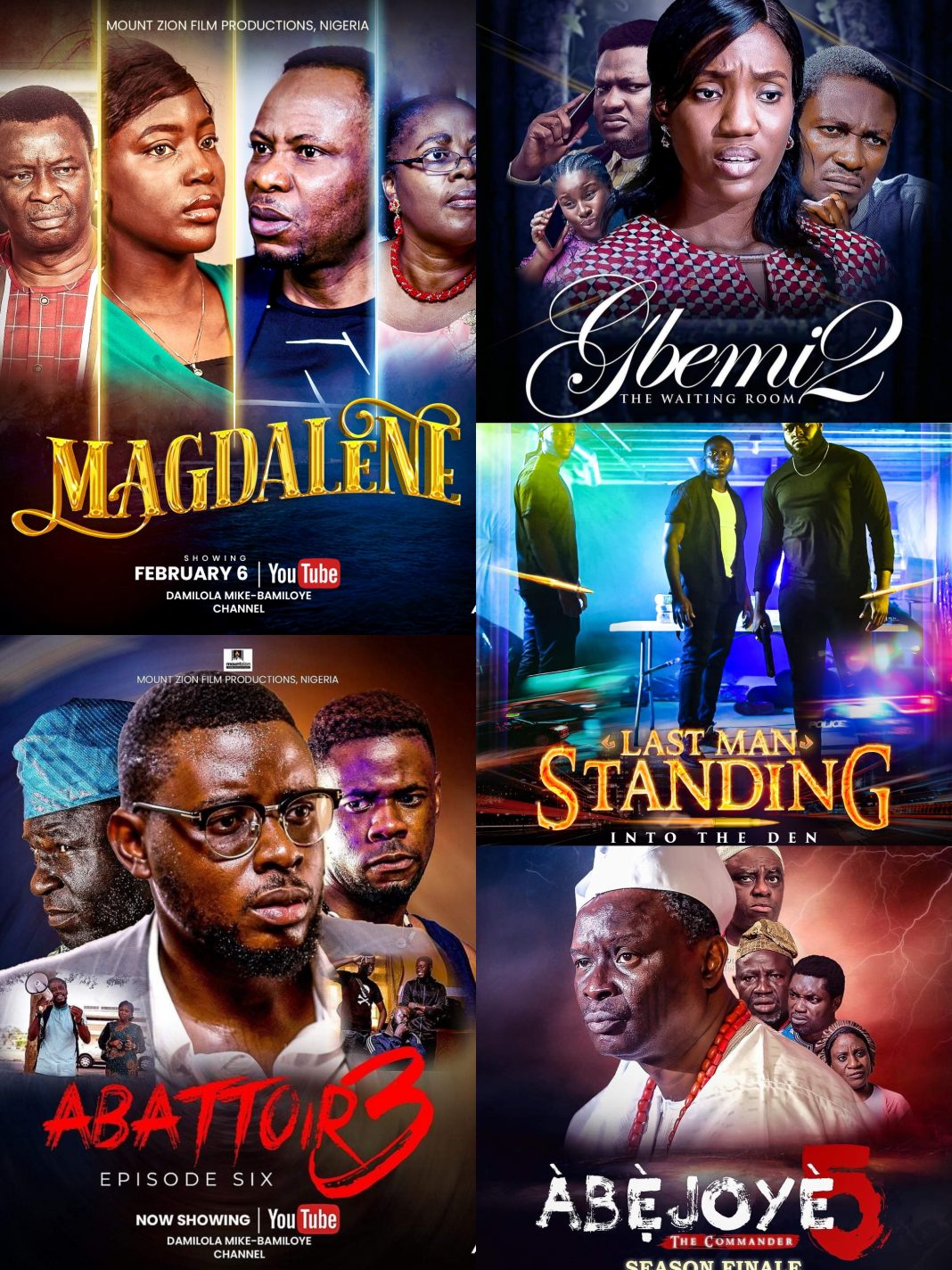 Inside, you will find the latest Nigerian Christian movies by Mount Zion Film Production.

Over the past few decades, Mount Zion movies have been at the forefront of Nigerian Christian film productions.

Founded in August 1985, Mount Zion Film Productions have grown to be the parent body to other production companies in the country and major parts of Africa.

Today, “Mount Zion Movies” is like a household name in many Christian homes in Nigeria. Almost every child has watched their old movies while growing up.

In fact, their film productions played a huge role in the upbringing of many Nigerian kids who have grown and are now adults. Needless to say that they are still making a lot of impact in people’s lives in general.

God has been using them to touch the lives of many people through their drama performances on and off stage from the old days of Apoti Eri and Agbara Nla to Abejoye and their latest movies.

The past few years, especially cannot deny the rich and quality content they brought to the screens. Also, there has been a lot of improvement in their movies in terms of graphics quality, sound production and cinematography.

The fact that their drama scripts are God-inspired can not be denied. So far, several amazing testimonies trail the streak of movies that the faith-based film company has produced.

Therefore, if you are looking for the latest Nigerian Christian movies to watch in 2022, your search ends here. Just below is a list of the recent movies by Mount Zion.

Abejoye is easily the most popular Nigerian Christian movie Mount Zion produced in recent times. This is because of the massive viewership that follows the serial release of the movie.

Abejoye has five (5) seasons. Each season has at least 3 episodes that complete the story of a powerful Yoruba traditional king maker called Àbèjoyè— the major character.

This popular movie by Mount Zion is a must-watch for every Christian believer because it dramatises the supremacy of God over dark powers. It explains the spiritual warfare between God’s children and evil forces.

It also showcases the benevolence of God in saving the worst sinner. For instance, Abejoye is known as a terrible dare-devil traditionalist in the small village of Ajibogun.

He is so powerful that no one is able to see his end. Anyone that questions his power is struck with a terrible disaster. Everyone in the village, including the king, scampers wherever he appears. Ajibogun could not contain him.

However, God saves whomever he wills and uses them for his glory. Abejoye’s story changed when he goes on vacation to London. He met God and his life changed completely.

The subsequent chapters of his life intimate with his spiritual wrestling with contending powers. When the evil powers realise that he is no longer touchable, they decide to use his son as a point of contact.

The plot continues to thicken as the old man has new battles to fight everyday. Does he overcome eventually? You will find out when you watch this interesting Nigerian Christian movie by Mount Zion.

Abejoye is indeed an impressive watch. Suspense runs through the episodes so that the viewer can not wait to see what happens next. Also, all the characters featured in the movie delivered their roles brilliantly. Hence, making it a first-class production.

This Mount Zion Movie tails Abejoye as another popular Nigerian Christian movie that we have seen in recent times. It has three seasons.

For a fact, Abattoir is leaves us with the unique and extraordinary talent of the writer and director of the act. In fact, some people claim that it is the best Nigerian Christian movie that they have ever watched.

This drama production is another dope and thrilling work of Damilola-Mike Bamiloye who happens to be the writer, director and lead actor (Martins) of the Mount Zion movie

Just like Àbèjoyè, Abattoir is a suspense-filled drama act that shows the contention between the kingdom of heaven and spiritual forces. Damilola Mike Bamiloye happens to be the son of a powerful ritualist chief Durosanya.

What you like about this Mount Zion Movie of 2022 is the elements of vulnerability, pity and fear that embellished the dramatic act. For instance, the viewers are made to sympathise with Martins through his hard times.

Abattoir is a top-notch Nigerian Christian Movie that shows the incredible talents of the characters. While we cannot carpet the stunning role of Martins (Damilola Mike Bamiloye), Chief Durosanya and Baba Gbenro also delivered their roles very well. Flora, Sandra, Dele, Inspector Gbade among others also interpreted their roles in action.

Above all, Abattoir capitalises on biblical themes such as intercession, spiritual alertness and intimate relationship with God as weapons every born again Christian should have.

If you have not watched this power-packed Nigerian Christian movie, you are missing out on the blessings God is dishing out through his anointed drama evangelists

“Gbemi—The Waiting Room” is one of the Mount Zion movies on Marriage. It is also the concluding part of Gbemi 1.

Obviously, this movie addresses the issues of seeking God’s will and delay in marriage, and how to handle marital issues in Christian homes.

Typically, life is not a bed of roses as many people thought it to be. Challenges come in different hues and colours. And indeed, marriage comes with a sheer taste of it.

This drama act is important for every Christian, especially the Christian singles and newly wedded folks because it talks about common universal issues that are found in many families.

Today, Many Christian homes have been destroyed because the couple lack the emotional as well as spiritual will, strength and intelligence to handle domestic crises when they arise.

The Family of John and Gbemi dramatises it all. After waiting for many years and getting married to his wife, John has to wait for another 5 ways before he eventually becomes a father.

But just before then, John sometimes tears up in anger and frustration. Thankfully, Gbemi is a praying partner that would not allow emotions to get into her head. Rather, she key into the place of prayer and seeks God’s intervention.

Gbemi is an interesting movie by Mount Zion, that will teach you everything you need to know about choosing a life partner and building a long-standing Christian home and handling domestic crises.

Magdalene is another 2022 Mount Zion Movie that you should watch if you have not. It also capitalizes on pre and post-marital crises. Basically, it is based on marriage.

It is a star-studded Christian drama that features Mike Bamiloye as Pastor, Gloria Mike Bamiloye as Mopelola’s mother, Godwin, Shade Awotubo and other talented actors who impersonated other roles in the drama act.

The movie starts with bro Marcus condemning bro Edward for beating his newly wedded wife, Mopelola. The mood however changes when Edward begins to tell his side of the story.

In fact, It takes special grace, patience and direction of the holy spirit to contain the unending insults, innuendos and allegations that the couple are throwing at each other before their pastor.

This Mount Zion movie teaches us great lessons that cannot be forgotten in a rush. How to settle accepts our pasts and differences and also how to settle issues amicably without raising a dust.

Thematically, there is one major takeaway from Magdalene: “to err is human, to forgive is divine.”

There is no way you will watch Magdalene and you will not feel the emotional impulse that the actors deliver. This leaves us with the tons of acting skills that minister life to the viewers.

We hope you like our story. Please, comment below to share your experience with any of these movies you have watched. We love to hear your feedback based on our update. Also, do not forget to support us by sharing this list of mount zion movies of 2022 with other people and follow Naija Banquet on all Social Media Platforms.