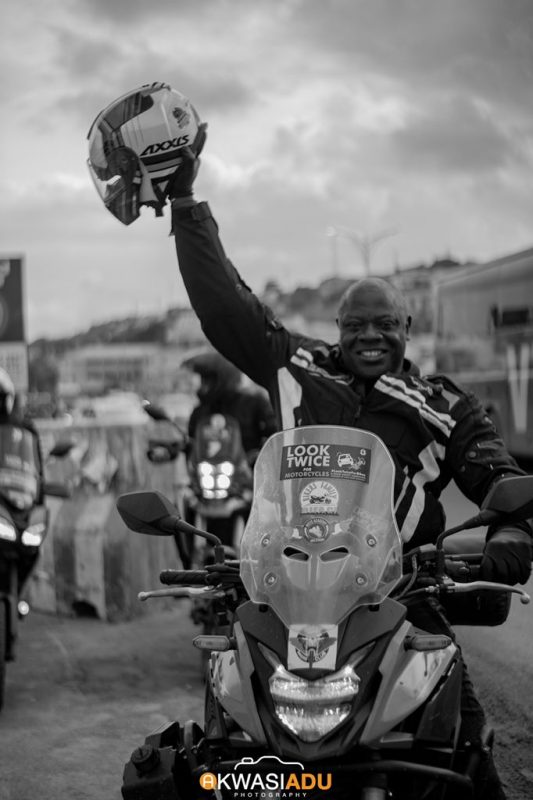 The man riding from London to Lagos, Kunle Adeyanju has shared his experience on his ride across Africa.

According to him, out of the 11,301km which the odometer on his bike reads, 3200km represents the total distance he covered in Europe while the remaining 8, 101km represents his ride across Africa so far.

Considering himself lucky to have had a first-hand experience of the continent, Kunle Adeyanju debunks the myth and distorted facts about Africa as propagated by the Western media.

To catch up on Kunle Adeyanju’s update, Naija banquet decided to share the African story from his perspective.

In this story, we shall narrow down his spell-bound account of his ride across Africa to four (4) major topical points.

Kunle Adeyanju could not hold himself from falling in love with the beauty that defines the African continent having biked across Africa from the North to the West part of the continent.

According to his narrative, Africa is a land of diversity with unique and interesting cultures which obviously shape its people.

For him, there is always something beautiful and exciting to experience when one steps a foot on African soil. Hear him:

“Africa is a land of beauty and culture, and on this trip, I fell in love with the real and true Africa I discovered.”

In telling his African experience so far, Kunle Adeyanju chronicles the hospitable and welcoming experiences he has had.

To drive home his point, he shares his Malian experience. Sometime during his ride from London to Lagos, he had an unfortunate tyre incident around 8 pm in a remote part of Mali.

Stranded, he walked down to “a nearby hamlet of 4 thatched houses in the dark of the night.” Despite his inability to speak their local language, they received him with warmth, recovered his bike and watched over it till the next day.

“To me, that his hospitality, sincerity of people and regard/respect for co-human,” says Adeyanju.

Furthering in his narrative, the Nigerian biker and rotarian says Africans are hardworking people.

Now using Burkina Faso as a point of contact with Africans, Kunle Adeyanju describes them as “hard working people going about their daily lives peacefully.”

“I rode alone for about 100km before rendezvous with with the Burkina faso bikers who we continued the ride together;

“…Everywhere I have been in Africa, the story is the same. People are nice, friendly and full of positive vibes.”

4. There is more to Africa than the Safari and Jungle Myths

As against the distorted images propagated by Western media. Kunle Adeyanju’s African experience tells a much more positive and interesting story than the safaris and jungle myths.

He could not help but question himself why Africans run to the West for holidays when Africa is really this beautiful and welcoming with friendly and nice people.

“The simple answer to the fact is the distorted image being portrayed about Africa as unsafe, bad people, warlord etc in the Western Media.”

For him, Africa is blessed. Unfortunately, Africans have not realised this truth let alone appreciate what they have.

To Know More About Kunle Adeyanju and His Heroic Ride to End Polio, Read His Biography below.