Obi Cubana: The “Ritualist” That Built a House for the Christian God 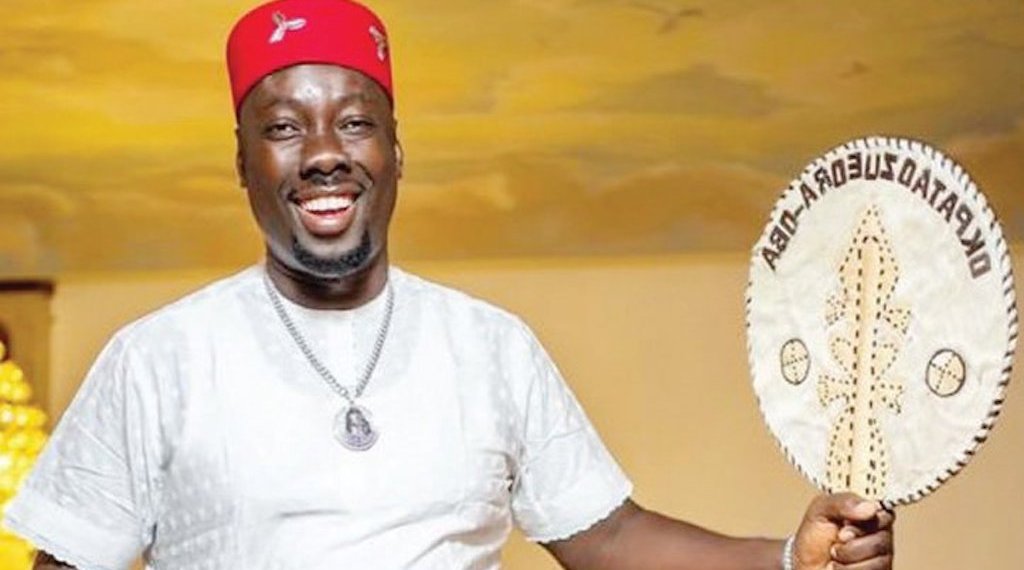 Popular Nigerian businessman, Obinna Iyeagbu also known as Obi Cubana has built an Anglican church in his hometown, Oba in Anambra State. According to reports, the construction of the church building which was built in memory of his mother Ezinne Uche Iyiegbu started on the church land four months ago.

This made the news in popular media outlets across the country yesterday. However, the bone of contention here is the credibility and acceptability of the cathedral built by “a ritualist” for the Christian God.

In July 2021, Obi Cubana organised an expensive funeral in honour of his mother where Obi alongside his associates and boys lavished billions of Naira with more than 250 cows slaughtered, assorted food laid out on tables, and tonnes of expensive wine and spirit downed by hundreds of relations, friends, associates, and well-wishers, it was a funeral party like no other.

Not forgetting the $100, 000 diamond pendant and necktie that dangled on his neck; for Obi Cubana, “he had to cut mama’s face on ice!” Indeed, his mother must have smiled down at him from heaven for replicating her face with some gemstones. But is there any other explanation of “the joys of motherhood” that is better than this— For a woman to live long and enjoy the fruits of her labour and have a befitting burial after death?

Of a truth, it was mama Ezinne’s funeral that brought Obi Cubana to the spotlight. Still, Nigerians must come at him in their manner. Everyone must talk their own about mama Obi’s funeral. What manner of man would lavish his hard-earned money on a funeral when people were dying of hunger on the street! That was obviously the most sophisticated funeral in Nigeria!. EFCC must torchlight the source of his wealth, it can’t be clean. Most definitely not! Everyone with their own opinion.

Obi won’t help the matter, either. His statement that “after my mama burial ceremony, to die go dey hungry some people” added petrol to the fire. Even Kanayo’s jokes were not funny anymore. His roles as a seasoned herbalist in the Nollywoods were now real. But Obi was only trying to celebrate his mother gloriously as his loyal fans spurred him on to do his thing.

Again, barely had his mother been buried when the EFCC invited Cubana for some quiz. They had never seen that kind of cash rain before. He must be evading tax. His public abuse of naira must be investigated too. The gossips were right after all. If he had made his money most cleanly and legitimately, he wouldn’t lavish them that way. The preacher even stressed that it’s all vanity.

Having this understanding that poverty is tantamount to poor thinking and that this exactly precipitated the ill comments fashioned against him, he must fix his public image. The media would be very useful. Granting interviews would be helpful. Visiting his Alma Mata would not be a bad idea either. Giving back to society would silence the gossips. The less privileged must be recognised too.

Above all, building a house for the Christian God would do a lot more. It would bury every misconception of him completely. This new cathedral would be dedicated to the furtherance of Christianity and the loving memory of mama Ezinne. Also, Obi’s mother sixth month service would be held in this new cathedral on the last day of the year. With fat promises for the new year: scholarships, schools hospitals, roads and more.

What a way to end the year!

APC Nomination Form, Indirect Primaries and What They Mean for Tinubu & Co

2023: 3 Factors That May Work Against Tinubu’s Presidential Ambition